The smarties over at MIT have come up with a phenomenal idea - engineer a "smart" form of insulin that floats in the blood stream and turns itself on when blood sugar levels rise.

This new insulin has only been tested in mice so far, but it has been shown to stay in the blood stream for 10 hours. When blood glucose levels become elevated, this glucose-responsive insulin becomes activated.

Using a smart insulin like this would decrease the need for testing blood sugars (yay!) and decrease the number of injections required for those who don't use an insulin pump.

I'm not sure if or how a smart insulin like this would work with an insulin pump, but I'd love to try it. This sounds promising! 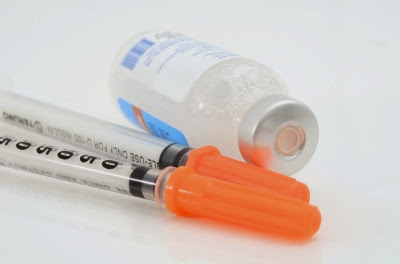 I frequently wonder...where is the artificial pancreas already, and when can I get my hands on one?

The short answer is that Australian researchers recently announced a commercially available artificial pancreas! The long answer is that we're still a long way away. Confused?

A four year old Australian child has been fitted with an artificial pancreas to manage his type 1 diabetes, which has plagued him since he was just 22 months old (poor baby!).

The Aussies say it auto-regulates insulin output based on blood sugar levels to prevent hypoglycemic events (low blood glucose). This sounds amazing and is certainly a step in the right direction, but an artificial pancreas? I think not.

This "artificial pancreas" is essentially described as a super insulin pump with continuous glucose monitoring capabilities plus a smart software algorithm that is programmed to anticipate insulin needs and to shut off insulin delivery prior to the blood sugar going low. That sounds incredible. This is much different than the insulin pumps already on the market, which deliver a steady stream of insulin at a specific rate continuously regardless of blood sugar levels, requiring the user to be extremely hands-on in managing the pump.

This is absolutely a break-through in medical technology. It's sure to prevent dangerous hypoglycemia and make life with diabetes easier to manage, and I would love to try it. It does NOT, however, manage hyperglycemia (high blood sugar) without user input.

My opinion is that the term "artificial pancreas" is being used irresponsibly in an overly loose manner. It's far too powerful a term for a suped-up pump/CGM combo.

The news of this break-through new pump is being sensationalized by some news articles through the use of the term "artificial pancreas". It's eye-catching and eludes to a cure, so of course it's turning heads.

Other news articles are staying true to what the product is: a pancreas-like insulin pump. These different terms are both being applied to Australia's new invention, and while it's clear that "artificial pancreas" catches more headlines, I seriously disagree with its use. "Artificial pancreas" makes promises to diabetics that the actual pump can't deliver.

In my mind, an artificial pancreas would be defined as a device (whether internally implanted or worn externally) that monitors blood glucose levels, pumps insulin, and is smart enough to automatically manage ALL blood sugars real-time without user input. As a type 1 diabetic, if I had an artificial pancreas, I wouldn't want to think about it, ever, except for when refilling insulin or changing injection sites, if necessary.

If we're talking about a true artificial pancreas, it would also monitor and manage glucagon levels in the same manner, as the body's regulation of this hormone (created in the pancreas) is also defunct in diabetics. Science has yet to figure out a way to synthesize glucagon, so this point is moot for now.

I hope to try out one of these new suped-up insulin pump/CGM smart combos when it's available in the U.S. I just ask that the media and those in the science and medical communities please stop tossing around a strong term that suggests a cure when we are clearly far from it.